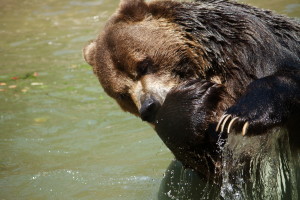 For many tribes-people, the Native American bear is believed to be greater than its own mass and as free as  the great wind. However, bears are also unpredictable by nature, and thus, have the potential for great fury, making them the perfect symbol for powerful warriors with the tribe.

In stories and folklore about the Native American bear, the creature typically would not harm humans who did nothing wrong, with a few exceptions. In addition, the maternal characteristics of female bears was often mentioned, with their protector-like qualities well noted. This is likely one of the reasons why Native American bears, and the symbols representing them, are often been used in Native American jewelry, wears, and art.

The Native American bear symbol, as a whole, in jewelry was often shown to represent leadership qualities, as well as strength. Another  bear symbol used in jewelry is the bear paw. The bear paw is believed to be an indicator or way of call for the animal spirit and it’s power, representing inner strength.