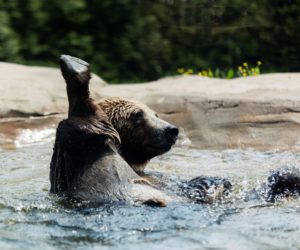 Since the bear has been featured in many facets of the Native American culture, there are also many stories that go along with the sacred animal as well. Some tribes even have Bear Clans that sport bear symbolism on their clothing and jewelry, so they may take on the favorable attributes of the bear as well.

One such tribe that holds the bear spirit in high regard is the Ute tribe of Cherokee. The origin story of the bear is particularly interesting. They believe that Ani-Tsa-gu-hi, a tribe from long ago, followed a child of their village to the wood because he said there was always food with no work. The boy had come back forth between the village and the mountains and he started to change into a bear. A portion of the tribe decided to follow him and their bodies changed as well. They decided from that day that they would be called Yonv(a) (bears. The hunters from this tribe would sing the songs of this story and the legend continued down the years.

Another story from the Iroquois tells the tale of how bear lost his tail. Once bear had a beautiful and long tail that he waved to show off, the fox became irritated by this and decided to play a trick on bear. Bear came upon fox and saw that he was fishing through a hole in the ice with his tail. Fox had caught many fish and the bear wanted to try as well so the fox took him to another spot and showed him how to fish with his tail. He told bear to dip his tail in the water and remain completely silent until fox told him it was time. The fox left bear overnight and when he came back found that bear was sleeping. When fox whispered in his ear to pull up his tail, he awoke but his tail had broken off in the cold. From that day, bears had small stubby tails and a hatred for foxes.

Native American culture is littered with amazing and funny tales of the proud bear and many other animals that are held sacred. Depending on the tribe, the story can be quite humorous or cast the bear in a position of great wisdom, guiding the Native people in some way. Today, the bear remains a figure for both strength and courage in most Native American tribes and the stories of his bravery, or even his follies, are told to Native children.