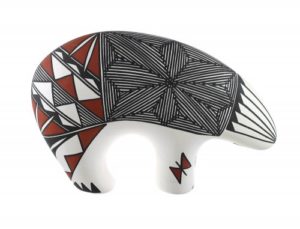 There is more than one way to honor the mighty spirit of the bear. Pottery is another ancient Native American art form that stretched even further back in history than their jewelry crafting. Thousands of years ago, Native American tribes molded mud with fire to create pottery pieces to carry water and to decorate for their oral history of storytelling as well.

As time went on, the Native American peoples began to learn new techniques, from experiment and through trading with the Spanish, and mastered new ways to create pottery with stronger material that could withstand etching and other forms of crafting images onto their pottery.

It wasn’t until the late 189th century, however, that pottery was used as an art form. Prior it had only held ceremonial and utilitarian use. Experts believe that the influx of tourism that came with the railroads were the reason behind Native Americans expanding their art for trade. Typically, with Navajo pottery, people will find the red-brown color that was present in the clay they use most often.

Another tribe famed for their pottery is the Hopi. Hopi pottery will usually consist of iron-rich clay that provides a creamy color to their pieces. They will also feature Native American patterns, instead of symbolism, ranging from sharp triangular lines to varied parallels.

One tribe that utilizes all these features in their art is the Acoma. This tribe will even shape the pieces into their symbolism, instead of painting them on a traditional pot. These fetishes are quite unique and make for an interesting way to honor the spirits of nature. Acoma bear pottery is a stunning example of how art can be combined with tradition, heritage, and culture.

Having the bear symbol within a home is believed to protect those that dwell within from evil spirits and give the strength as well. The spirit of the powerful bear truly comes alive in Native American pottery.