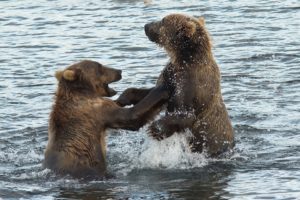 While many Native American tribes hold the bear as a sacred animal, the Southern Ute tribe takes another approach with their unique Bear Dance. The meaning of this dance has long been forgotten but the oral history can be traced all the way back to the 15th century, when the Spanish journeyed to America. The Bear Dance is held in the spring time and is often celebrated as a large gathering of the Native community with music, food, and various other dances.

Traditionally, the men are the ones that perform the Bear Dance, while the women prepare the clothes that are to be worn by the family ahead of time. Stories are also told during this ceremony of how the dance was performed in days long past. However, since modern means of storytelling have interfered with the old ways, it’s hard to tell what the dance was originally meant for.

While the meaning may be lost, stories live on. One of the most prominent tales told is the story of two brothers venturing through the mountains. As they stopped to rest, one of the brothers eyed a bear that was standing upright and appeared to be dancing while making a strange noise. The story goes that one brother continued on to hunt while the other stayed behind to watch the bear. The bear then taught the brother the dance and the song that goes with it.

To this day, the tradition is still carried on with the Ute tribe and continues to be a source of great joy and wonder among the community. The brother in the story went on to teach his people the dance. Many believe that the lost meaning of the dance was to honor and respect the powerful spirit of the bear itself.

Another significant element of the Bear Dance is that it takes place in winter. Many are eager to release their energy as the harshness of winter fades and the Bear Dance was simply a fun and exciting way for the community to get together and do so.